What leadership style is, what it isn’t and when to adapt

Imagine this scene. The Austrian conductor Herbert von Karajan strides confidently onto the stage the day before the Deutsche Grammophon recording in 1955. He doesn’t know it yet, but it will form part of his magnificent legacy. He has no baton. He doesn’t preside over the conductor podium, opting instead to casually draw up a chair and sit on the musicians’ level. Karajan purposefully leans into the violinists to show them he’s actively listening.

He seeks their input, “Shall we run through the first passage to see how it feels?” He doesn’t direct.

Before long, the violas play too delicately in a forte passage. The strings are supposed to build slowly and heavily. No matter, thinks Karajan. I’ll empower them to discover the issue. “As you play the music, keep in mind the central theme of the piece we want to convey and make sure you feel and portray it,” he encourages. But the notes are too fast, too sharp. He perseveres, “Is this working for you? The music?” Yet the musicians are struggling to understand the vision and what they are doing right or wrong. They can’t play their best; not as one philharmonic unit in any case. There is no beautiful symphony, just a collection of musicians playing to their own chaotic (empowered) tune.

For any classically-trained musician or aficionado out there, you will quickly note that this opening scenario is fiction. In reality, Karajan was heralded one of the greatest conductors of the 20th century because he actively directed some of the best musicians in the world very specifically on his vision for each piece. By the power of his podium presence and his meticulous preparation in rehearsal, he created a best-in-class blended orchestral sound. He was an authority who provided instruction, assigned roles and tasks and filled concert halls with rigour. His directive leadership (and not empowering approach) enabled him to create masterpieces not only because it matched the situational context, but also because it’s what the musicians expected and needed from him.

This fictitious opening demonstrates what would happen if someone incorrectly led a group by encouraging them to be involved and seeking their input, when they really needed direction from above. Similarly, in other situations, it’s easy to picture the leader who, due to their overly-directive and micro-managing approach, failed to achieve team buy-in or get the best results.

Beware of these trick questions: “What kind of leader are you? Or what’s your leadership style?” There are two problems here. First, leaders often narrowly think of themselves as having one particular style (“I care about tasks versus I care about relationships”). Second, leaders tend to adopt a style that aligns with their personal preferences, abilities, and what has worked for them so far. Before long, however, this one particular style becomes their style, as if it’s something that defines them.

In reality, leaders exercise multiple styles across situations and their careers. Style is simply a pattern of related behaviours a leader uses to influence the team towards achieving a goal. For example, the empowering style involves sharing decision-making authority and seeking input from team members whereas the directive style centralises decision making by the leader who gives the commands.

Those with a fixed way of leading will limit their ability to influence the right people at the right time, especially as situations unravel and their roles evolve. Instead, effective leaders are able to adapt their style to the situation and the people involved – otherwise known as a “situational” view of leadership. Situational leadership isn’t a new concept. In the 1960s, leading psychologist Fred Fiedler discussed “contingency leadership”, a departure from focussing on a leaders’ personality and a move towards leadership behaviour. Since then, scholars have continued to investigate exactly when different leadership behaviours are effective in different contexts. 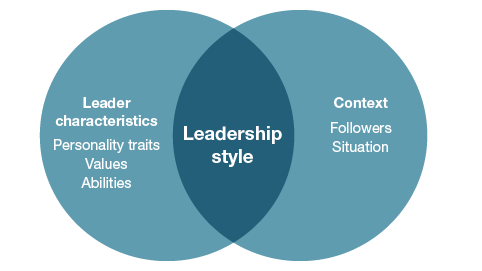 The lesson? Instead of seeing yourself as a leader operating with one fixed style, raise your head and look outward to context. Think, what’s the situation, the objective, and importantly, what does your team need from you? Rapidly compute and then apply the requisite leadership action. When we view ourselves as versatile leaders able to respond to different environments with a menu of different leadership actions, we’re more likely to break down our rigidity. We’re less likely to overuse the same old style. Unless you’re working in a vacuum (or a completely stable environment where change doesn’t occur), realising that style is what you try out and not who you are will give you a greater chance of success.

Another common mistake of leaders is they tend to think of their team or organisational environment as relatively stable. This, in fact, can underlie much of the narrow and rigid thinking of leadership styles – “What worked for me before will work again” – because of the failure to see that the environment now isn’t the same as before; that the situational needs are different.

The reality is that today’s garden of work is without any walls: there are often no neat boundaries for organisational teams or between corporate and gig life. Companies are global and people swirl together as part of an open talent economy. A 2017 LBS survey with strategy firm Eden McCallum showed that knowledge-intensive industries such as professional services are also fast-growing parts of the freelance economy. Businesses are also reorganising themselves: 80% of organisations worldwide are moving (or have moved) to a team-based structure. And the nature of this teamwork is changing.

When a leader believes they can handpick a team to fit their style, it echoes the traditional view that a team is a static group of individuals who can build their understanding of each other – how to interact, how to complement each other – gradually over time. The reality is that team life cycles are much shorter and leaders don’t often get to pick who they lead, so they need to rapidly adapt and prepare for something called “teaming”.

As Amy Edmondson of Harvard Business School puts it: “Teaming is a verb. It is a dynamic activity, not a bounded, static entity. It is largely determined by the mindset and practices of teamwork, not by the design and structures of effective teams. Teaming is teamwork on the fly.”

Environmental changes mean this: leaders must be fully cognisant of the macro and micro changes of the teams they lead. Whether that is a change in membership, projects and tasks, or technology, leaders must be aware of these dynamic situations and adapt their style to fit.

Illusion: One style fits all
Reality: Adapt style to context

It is widely reported that Cressida Dick, now Scotland Yard’s first female Commissioner, has a reputation for clear decision making and straight talking. She was caught up in the controversy and painful operation which led to the fatal shooting of Jean Charles de Menezes, wrongly identified as a potential suicide bomber. She was exonerated three years later and went on to run London Met’s counter-terrorism unit.

People who have worked with her claim they respect her steely approach. One former colleague in the counter-terror command said: “As a leader, she instils great confidence because she is so sure-footed and you know she will back you 100 per cent. She never shirks her duty as we saw back in 2005. There were not many people who were willing to stand up and take on the responsibility, but she did.”

Dick is a case in point for a directive leader whose high-stakes context often calls for clarity, predictability and order. In the main, she makes decisions for the team with authority. When context allows, however, Dick enjoys working in an open-plan office with her senior team, saying it “creates a better dynamic”. In some settings, away from fast-paced meticulous operations, she asks for input from the team. “I am all about teams,” she said. “I think I have probably got a reasonably relaxed style as a senior leader, I am pretty demanding, I am known as tough, not a soft touch, but I try to be friendly and I want my staff to feel they can come up and chat to me.”

Again, one style doesn’t fit all situations. A leader’s success is determined by the style they use and when. On the one hand, directive can be useful when a leader is the expert, and the performance situation requires efficient and timely direction. However, overreliance on directive leadership can inhibit long-term motivation and make employees dependent on the leader for decisions. On the other hand, empowering can enable team members’ learning, initiative and commitment. This is useful when leading a team of peers, experts or senior members, but is less time-efficient and incorporating everyone’s ideas can be a real challenge. Directive and empowering might be at two opposite ends of the spectrum, but each can still be used by the same leader at appropriate times.

The question is, when, exactly, should you adapt?

Learning when to adapt your style

On the Leading Teams and Organisations module of LBS’s MBA programme, I ask groups of students to build a tower. They have four minutes to do it. The builders are blindfolded, and the leader can’t build, they can only observe and instruct from the sidelines. Teams get three shots to complete the activity and the goal is to improve each round.

This situation – leading a team with constraints, where members lack certain abilities but must nevertheless work together to accomplish a goal under extreme time pressure – is all-too common in organisations. Here’s the rub, do you think most leaders are directive or empowering under pressure?

The optimal strategy in this task is to empower the team to figure out a way to communicate and coordinate their build. Just the tiniest corrections are needed from the leader. However, most take an I-must-fix-it, authoritarian leadership approach. Directive instructions and commands by the leader create a bottleneck – typically, one member ends up building as the others twiddle their thumbs until the stopwatch sounds.

And now comes the critical moment: after the first round, do you think leaders recognise their sub-par performance and make the style switch on round two? Yes and no. It’s human nature to double down on your dominant leadership style when the pressure is on. More often than not, leaders stick to their style, sometimes even spewing the same orders in the same way, a little louder.

Versatile leaders, however, recognise such critical moments when their approach isn’t working and adapt. By doing so, they can lead and motivate more effectively in the future and unleash their team’s ability to achieve higher performance.

Now that you know the illusions, would you be willing and able to experiment with your leadership approach?