Dutch business confidence surges at home amidst fears from overseas

Dutch business confidence is returning, according to the second annual economic outlook survey conducted by management consultancy Eden McCallum. Just over 300 business leaders responded to a questionnaire sent out at the end of November. It is clear that while there is much more optimism about prospects for the Dutch economy, concern is rising both about the single currency and the wider global situation.

80% of respondents are feeling positive about the Dutch economy, up from 66% a year ago, and less than 8% say they are pessimistic about domestic economic prospects, compared with a figure of 17% this time last year. There is a somewhat paradoxical attitude to the Eurozone. While overall optimism about the Eurozone economy for the next 1-2 years has risen – up to 50% from 39% last year – fears that another crisis will hit the single currency within the next 5 years have grown marginally from 53% to 57% of respondents.

Taken together, this possibly suggests that Dutch businesses feel they may be insulated from any future downturn by residual strength in the Dutch economy.  It also seems to reflect a view that while the short term is relatively stable in Europe, greater risks remain in the medium term. 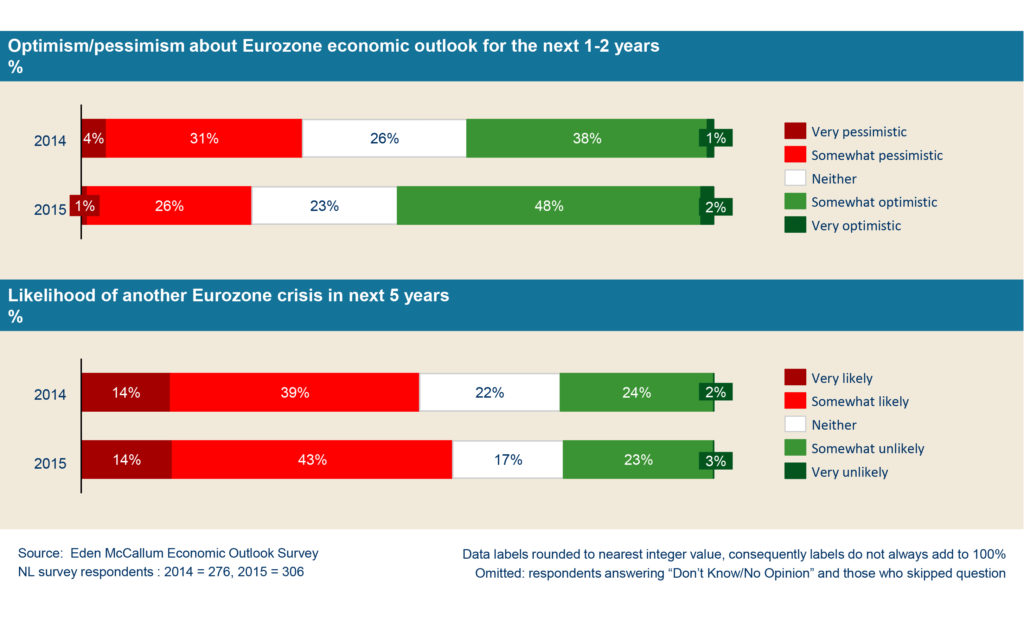 In contrast, on the global stage nervousness about both the short and medium term has increased, and the focus of concern is China. Optimism about the global economy for the next 1-2 years has fallen to 55% from 71% a year ago, and 50% think a global financial crisis is likely over the next five years, compared with only 39% a year ago.  China is seen as the most likely source of any future financial trouble by over half of the business leaders surveyed, and Europe by only a quarter.  Last year, these two shared the top spot, and were cited by just over a third of respondents each as the likely origin of a future crisis. Theodor Kockelkoren, former board member of the Authority for the Financial Markets (AFM), says these results are in keeping with other data and anecdotal evidence emerging in the Netherlands in recent times.

“There has been a slight improvement in the macro situation in the Netherlands,” he says, “with joblessness falling a little. You see the banks beginning to lend again in certain – though not all – sectors. But political uncertainty continues to be a risk factor here with our minority government.”

Kockelkoren adds that there is still a big debt overhang domestically and that this still has to be managed out of the system. Yet the housing market is beginning to pick up.

Adair Turner, former chairman of the UK’s Financial Services regulator and author of ‘Between Debt and the Devil: Money, Credit, and Fixing Global Finance,’ adds that some Dutch optimism, especially concerning the Eurozone, may be a little overdone. The European Central Bank confirmed with its recent rate cut that Europe remains stuck in a deflationary moment.

Still, Kockelkoren is guardedly optimistic. “Anecdotally you can see some signals that are consistent with improved optimism,” he says.

Eden McCallum’s survey was conducted online with their clients and other business leaders. Responses were gathered 19-25 November 2015, and at the same time of year in 2014. In 2015 there were 306 respondents to the Netherlands survey.